I thought I had the Fremantle train line all worked out.

Out of all Perth’s metropolitan train lines, the Fremantle line seems to be the one with the most … interesting people. Or, as a Transperth security guy once described it to me, “free housing for the crazies”. (His words, not mine.) The “crazies” are usually flamboyantly weird, but benign. Nevertheless, sometimes it is nice to get through your commute without any Transports of Delight. (Dare I say it? Sometimes a boring train ride is preferable.) So, I usually do my best to avoid attention.

I’ve gathered a few pertinent strategies, and I will elaborate on them in later posts. But one crucial strategy is location, location, location. Where you sit can determine how likely you are to have someone yell at you about their ex-wife for forty minutes.

My main strategy for riding the Fremantle line is to find a seat with an empty seat opposite, so I’m not staring directly into the face of another person. Then I employ a technique I call “going catatonic”, where I remain in the same attitude, without looking around or moving, for the rest of the journey. Public People usually seem to interpret movement, or any sign of life whatsoever, as an invitation to engage. Therefore: play dead.

As you walk through the doors of a Fremantle train carriage, you are faced with two options: you can either sit in the small cul-de-sac at the end of the carriage, which is slightly separate to the main carriage; or you can turn the other way and sit in the main, cattle-class seating area.

I walked onto a Fremantle train carriage and performed my usual quick scan for locations. The main seating area was quite crowded and had few empty seats. I turned to my left. The carriage cul-de-sac was completely empty, except for one regular-looking guy sitting in the corner. I went that way, thinking the nearly-empty cul-de-sac would make for a nice, quiet ride.

I hadn’t even sat down when Regular-Looking Guy started shouting non-sequiters at me. “THAT’S A NICE DRESS. DO YOU LIKE ART?” My heart sank. I had chosen the wrong location.

When I didn’t respond to his questioning, Regular-Looking-Guy-Who-Was-Actually-Crazy continued to shout. “I DON’T REALLY LIKE ART. LOOK, THIS IS ART.” He motioned to the large canvas he had propped on the seat next to him.

“THIS IS AN ORIGINAL PRINT OF A JACKSON POLLOCK.” Pause. “LOOK, HIS NAME’S ON IT, THERE. LOOK THERE!”

I did not look there. I was not even remotely in the mood for this. But I knew if I stayed in his cul-de-sac, with no one else to draw his attention, he would keep on at me like this. The volume at which he spoke told me that he was not someone who would respond to, or even notice social cues. So, I stood up and moved to a better location, down the train.

I find it really difficult to be this openly rude to someone, by the way. It doesn’t come naturally; I’ve had to school myself in the art of rebuffing people. I still feel bad about it, but when you’re a young female journeying alone, it becomes a matter of personal safety. American author Gavin de Becker wrote an excellent book called The Gift of Fear, in which he points out that people, women especially, often remain in dangerous situations to avoid ‘being rude’ to a stranger. If a strange man tries to strike up a conversation with you (the single female), you’ll probably feel obligated to respond, even if the guy gives you the creeps. According to de Becker, this is because

explicitness applied by women in this culture has a terrible reputation. A woman who is clear and precise is viewed as cold, or a bitch, or both. A woman is expected, first and foremost, to respond to every communication from a man. And the response is expected to be one of willingness and attentiveness. (de Becker, 1997)

Well, I didn’t respond with willingness or attentiveness to Regular-Looking-Guy-Who-Was-Actually-Crazy, and to my knowledge, society has not imploded. The guy didn’t even seem that fazed – this must happen to him a lot. While RLGWWAC was not necessarily a threat to my safety, he made me feel uncomfortable. He was a stranger, a man who made unsolicited approaches to a woman sitting alone. A regular guy (who was actually regular) would have just left me alone.

At the next stop, a tidal wave of teenagers flowed into the train, and they immediately filled up RLGWWAC’s cul-de-sac. Nothing, not even hundreds of lorikeets screeching in the pine trees over Cottesloe – not even they could be louder than a group of teens on a train. But amidst the din, I could hear RLGWWAC’s voice rising from the middle of the crowd. He was in his element. “DO YOU LIKE ART? HOW ‘BOUT YOU? HAVE YOU HEARD OF JACKSON POLLOCK?”

A few stops later, I noticed Regular-Looking-Guy-Who-Was-Actually-Crazy trying to push his way out of the throng, his Pollock print flapping at his side. The teenagers sullenly moved aside for him. (I’m not just stereotyping here, this lot looked genuinely sullen.) RLGWWAC turned around and hollered at them, “GOODBYE! HUGS AND KISSES FOR MUMS!” He departed, adding, “HUGS AND KISSES FOR DADS TOO!”

Since this experience, I have learned two things about the carriage cul-de-sac. Firstly, it is not a good location for single journeyers, mainly because it is usually commandeered by large groups of friends who want to chat loudly to each other about “what Mark said”.

Secondly, if it’s empty except for one man, even though the rest of the train is crowded, that guy is probably animal crackers crazy.

I’ll be on Radio Fremantle 107.9fm from 10.30am this morning, reading some of my poetry and having a bit of a chat. Tune in if you’re in the area!

In other news, the Buzzcuts Perth program has been going well! The crack team of writers I’m coordinating have been writing up some fantastic reviews of Fringe World. You can read them on the Buzzcuts blog, or on PerthNow.com.au

Speaking of Fringe World, if you’re in Perth you should definitely be checking out some Fringe shows! There’s 150 shows on offer, with heaps of variety. I especially recommend the story showcase Barefaced Stories at the Blue Room. I might be a bit biased because I’m one of their storytellers (I did the Barefaced opening night on Tues) but seriously it’s a brilliant show! And it’s different every show, so you can go to more than one.

So much to do! Huzzah!

So I finally got around to posting these, a month later! These are some photos I snapped at the WA launch of Voiceworks # 87 PLAY. (Sorry for the slightly blurry quality, I took ’em on an iPhone.)

Last night we launched Voiceworks #87 PLAY in Western Australia, and holy moly it was awesome.

Comedian Libby Klysz was our host for the launch, a perfect host for the PLAY issue as she joked around with the audience, played up performers’ introductions, and promised everyone “games … with prizes!”

First cab off the rank was sweet singer-songwriter Caroline J Dale, whose quirky lyrics and gorgeous voice never fail to win over an audience.

Next we had a poem by emerging artist Alex Wolman, who led us on a dark journey through relationships and suicide. Sj Finch came in with the lighter side; the dotdotdash editor and Voiceworks contributor performed a clever and entertaining piece that had the crowd chuckling.

Everyone was pretty engrossed by the performances, but in between-times they had a chance to wander around: looking at the Perth Zine Collective‘s amazing array of hand-made zines; buying copies of the latest Voiceworks issues; and admiring artwork by Western Australian artists Sam Pash and Mel Pearce, whose works have been respectively published in Voiceworks ‘V’ and ‘Play’.

Zinester and Voiceworks contributor Anna Dunnill opened the second bracket of performances with a reading of an intelligently written piece. She was followed up by hip hop poet David Vincent Smith (dvs) who slammed us with a barrage of clever wordplay. Holy shit that guy can poem. dvs was supported by his friend DJ Silence, who mixed sound effects and hip hop beats behind dvs’s poems, adding yet another dimension to the words.

Last, but certainly not least, we were blessed with a performance by the beautiful ‘Ofa Benness. Best known around Perth for fronting her band Odette Mercy & The Soul Atomics, last night ‘Ofa had ditched the band and played a solo set. Performing a mix of singing and spoken word, between songs she chatted with the audience, relating the theme ‘Play’ back to her life and her music. Then ‘Ofa brought the whole venue to a standstill with her breathtaking vocals and wryly beautiful lyrics. I totally have a girl-crush on her.

We wrapped up the night with a pretty raucous game of Heads and Tails, and two happy and highly competitive audience members went home with book prizes kindly donated by Express Media.

Many, many thanks to Mojo’s Bar for being such a welcoming venue, to Libby Klysz for being an entertaining host, and to all the performers for kicking ass. I can’t wait for the next launch.

The poster features artwork by Voiceworks contributor MEL PEARCE - a taste of the artwork that will be on display at the Voiceworks PLAY launch.

Guerrilla street art, inspired by The Adventures of Alvin Sputnik, is popping up all over Perth and Freo. 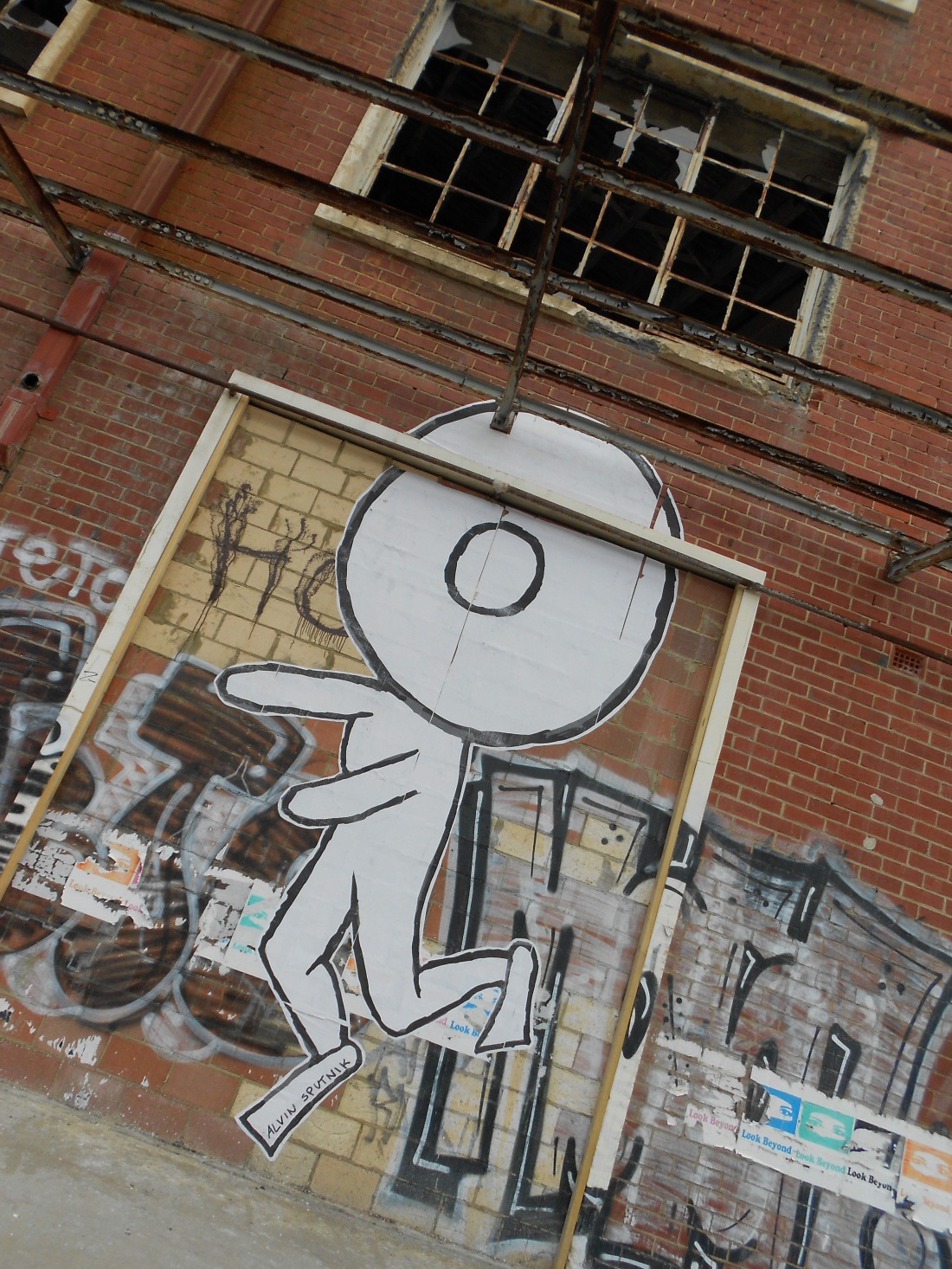 Find out more about Alvin Sputnik.

I’ve uploaded another video from my Voicebox gig back in July. It’s a short hip hop-style poem I wrote called ‘Think About What You’re Saying’, decrying the misuse of language. At the beginning of the vid, I’m having a little chat with the audience. They were great that night; I even had a couple of hecklers. I was telling the crowd that I’ve been writing poetry for 20 years, and some wag called out “How old are you?” Whoever that was, thank you for participating in the banter. I very much enjoyed it.