Apologies for the quietness lately. I started a new job, which has been taking up much of my time. This job is a bit special, because one of its perks is limitless ice skating. That’s right, ice skating. In the middle of Brisbane, Australia. Ice.

At first I was terrified of setting foot on the slipperyness. I’m not the kind of person who is known for their grace. I trip over thin air. So, I figured I had no chance at all on ice. But, dammit, I was going to give it a shot.

And I did not fall over! Not even once!

Granted, I was leaning heavily on a sled (a sled designed for toddlers who are still learning to walk).

But I kept my balance! And eventually I graduated to skating without any kind of crutch. It was a proud moment. I wish my parents could have seen me.

I actually do wish that, because my folks grew up in America and always had their own ice skates; some of my earliest memories are of family holidays in the States, with my parents trying to convince me to enjoy sliding around in the snow. I was a child of tropical north Queensland – I did NOT like this cold stuff. Wearing all those layers confused me; why couldn’t I walk around in my underwear all the time? We did back home! Cold climes were not for me.

But luckily, people change. Now I quite like the ol’ ice rink. Sure, it still feels unnatural to strap blades to the bottom of your feet and skitter around on them, but I’m learning. Perhaps this will be my new favourite way of getting around.

In some places, ice skating could be a legitimate mode of transport. In Holland, for example, they all seem to be born with their feet on the ice. I was in the Netherlands a few years ago, visiting a friend for a week. I just happened to arrive in the midst of headline-making Dutch weather. The canals had frozen over for the first time in 12 years. For over a decade, no one had seen that much ice. Then, suddenly, EVERYTHING was frozen! 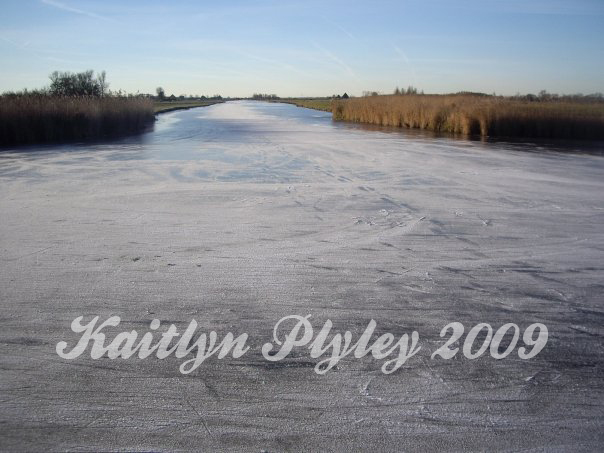 All the locals in Edam, where my friend lives, were ditching work and grabbing their skates. People were skimming along the narrow waterways that run through the fields, their hands clasped behind their backs. My friend and her family kitted me out with some spare skates and dragged me to the nearest lake.

I was terrified. That thing about me not liking the cold? It was kicking my ass. If my friend hadn’t pulled me bodily along the ice, I would have just crouched in the middle of the frozen lake until it melted. Images of terror-stricken people falling through the ice were tearing through my head. Even the mental vision of Bear Grylls doing naked push-ups to demonstrate how to survive in arctic wilderness wasn’t doing it. And that image usually solves any problem.

After a while, my friend suggested we skate to the riverbank for a rest. (She was probably tired out from pulling my dead weight up and down the lake.) The ice looked much thinner near the shore. I nervously hung back and watched her casually glide to the edge of the frozen part. Under her weight, the sheet of ice we were standing on suddenly plunged downwards, and water whooshed up from underneath, spilling across the ice and the riverbank. I whimpered in fear. My friend merely prodded the dark ice with the tip of her skate blade and said in her charming Dutch accent, “Okay, here is good.”

She walked right off the ice and sat down on the grassy bank. I quivered after her. Other Dutch people were watching me while they unwrapped their lunches. They were smiling slightly, as if I was the weird one. They were picnicking on a snowy riverbank! Meanwhile, children and toddlers skated dreamily past me.

I didn’t understand the Dutch fascination with ice skating. I thought it was a terrifying and needlessly dangerous leisure activity. But now that I’ve had some more practice, I can appreciate how beautiful it is to glide around on an expanse of glittering white.

Now, if Queensland ever experiences some inclement weather and the Brisbane River freezes over, I’ll be ready. 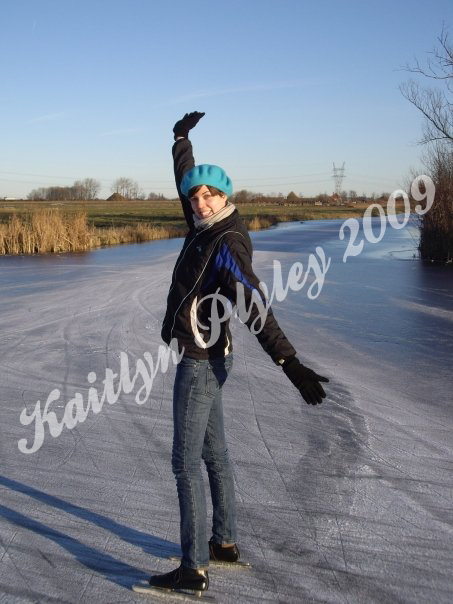 Standing completely still with no help: An achievement.