I discovered something interesting on the weekend. I have a high level of emotional intelligence.

In fact, I am so emotionally intelligent – so very much so – that I knew exactly how to handle an uncomfortable situation on the bus today.

The bus was trundling toward the city, and I was sitting down the front, enjoying my window seat. It was a cold, sunny day in Brisbane today – the type that’s beautiful with a cruel, glittering kind of beauty. It was warm inside the bus, so I was content. As we plunged beneath the city, into the subterranean busway, I started to hear a small noise coming from the back. It was a faint, staccato sound, repeating every few seconds. A small ftss.

I did not turn around. The sound was getting more insistent as we swung past the Queen Street Mall bus stop and up towards daylight. There it was again.

I supposed we had a sufferer of Tourette’s Syndrome on board. No worries – we had someone with Tourette’s in one of my lectures at uni. Once you got past the fact that someone to your left was grunting ‘Hup!’ over every third word the lecturer said, it became nothing more than lecture hall ambience.

Now the sound had gotten out of its seat and was moving towards the front of the bus, becoming more audible.

The sound belonged to a smartly dressed young man with far too much gel in his hair, who evidently wanted to disembark in the city. But this bus didn’t stop in the city – it passed right through on its way to the eastern suburbs. Now Pointy Hair had realised this, and was approaching the bus driver.

As the bus cruised through the last set of traffic lights before the motorway entrance, there was a quiet conversation. It suddenly became loud.

The bus driver – a tough, middle-aged woman with beefy arms and an operatic voice – yanked the bus vindictively over to the kerb. She leaned on the steering wheel and glared at Pointy Hair.

The young man was much calmer now that the bus had stopped. He tried to swipe his Go Card to tag off, but the machine hadn’t registered the stop.

He asked, ‘Could you please turn your machine on?’

‘READ THE FRONT OF THE BUS!’

Meanwhile, two other passengers stood up, the ones who were also on the wrong bus but had chosen to bear it with dignity. Now they were rushing the doors with relieved looks on their faces.

The bus driver was livid. ‘AW LOOK,’ she thundered at Pointy Hair, ‘NOW EVERYONE’S GETTING OUT!’

‘Could you please turn your machine on.’ 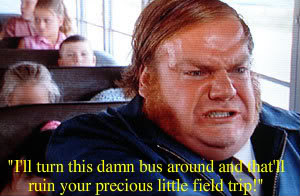 As the shell-shocked survivors of her wrath scattered on the sidewalk, the bus driver threw a foul look into her rear-view mirror – as if daring any of us to ding the bell – then heaved us back onto the road. We rode onto the motorway in a silence that could’ve combusted. I kept waiting for her to shout at us like a pissed-off teacher who’s just sent the naughty kids to the principal, but still needs to vent. I was waiting for, ‘THAT’S WHY YOU ALWAYS READ THE FRONT OF THE BUS!’ But it never came. It was probably saved up for whoever was waiting for her at home, god rest their soul.

Now, because of my heightened emotional intelligence, I was able to handle this situation very well. (Clearly these EIQ tests are extremely accurate.) When presented with a highly charged atmosphere and a conflict situation, I reacted with the grace and style of someone who has aced the emotional intelligence test.

I ducked down in my seat and tried to stop the tears from coming.

Yep. Watery eyes and a trembling bottom lip. Frightened of the bus driver. That’s the mark of an emotionally superior being, right there. Boom. Take notes everyone, ‘cos this is how we do.

I’m six feet and one inch in height. That’s tall for a girl. It’s tall for anyone outside the world of competitive basketball. So I’m used to sticking out, to being noticeable. I’m used to people pointing me out like I’m a sideshow attraction.

I am not used to being accidentally sat on.

But this is what happens while I’m waiting for the bus. It is one of “those” days. I’ve just been shouted at by a bus driver. I’ve gotten on the wrong bus and had to get off again, and now I’m waiting for the right bus to appear so that I won’t be late for work. I’m feeling a bit fragile, a bit sensitive. There are empty seats on the bus stop benches. Sweet! I sit down with relief.

While I’m sitting there, recovering the shattered pieces of my ego, a woman hobbles into view. She’s about middle-aged, wearing several layers of clothing, and clearly a bit mad. She has one crutch in each hand, holding them out in front of herself like dual walking sticks. A younger woman darts at her side, like an anxious hummingbird.

The woman on crutches spots the benches and, with surprising speed, heads towards the empty seat next to me. Or so I think. Next thing I know, her butt is lowering itself into my face. She is saying “No, I need a seat with the arm rest on the left! On the left!” I angle sideways, sliding myself out of her trajectory just seconds before she plops down in my seat.

I stand next to my now-occupied seat, a little startled. I feel like Anne Hathaway inThe Princess Diaries.Before the make-over. The hummingbird woman murmurs an apology over her shoulder, leaning down to help arrange the older woman in the seat. Not sure what to do, I sort of turn on the spot. A woman sitting on a nearby bench catches my eye. She saw the whole thing. I can tell, because she’s trying not to laugh. I grin back at her.

And, out of the haze of this average morning, I feel it. Transports of delight.

Ugh, why do they do this?

I’ve got my Go Card ready to swipe, I’m getting on the bus in an orderly fashion, but the driver stops me. He has something to say.

I wait, wearily, standing with my bags full of shopping in the entrance of the bus. I think I know what’s coming, because I’ve become familiar with this routine. I’m about to get the “You’re An Idiot and Here’s Why” speech.

The bus driver barks at me. “Did you get off here for the markets earlier?” (This is not tricksy detective work on his part; I’m holding a potted fern in a plastic bag and a flyer for the Australian Greens.)

I look around. I’ve been walking around the area all morning, and I’m not sure which bus stop I used. “Um, yeah, probably.”

The driver laughs, but he says the laughs – “HA. HA. HA.” He is pleased to have identified my stupidity. His thick white beard shakes, making him look like a condescending Santa Claus.

“Dude,” – it’s weird hearing ‘dude’ from Santa – “I stop at the markets until twelve today! HA. HA. You could have gotten off there! I sang it out when we set off, didn’t you hear?” I stare at him. I wasn’t on his bus earlier.

Finally he lets me go, and I find a seat while the rest of the passengers watch me. This is so frustrating. I am still new to this town, so I already feel like a lost idiot most of the time. I appreciate when bus drivers offer friendly advice, but now they’re taking extra time to point out things I could’ve done better? Come on, dude!

This comes after weeks of bus drivers pointing out my idiocy. One driver, when we reached a stop, pulled the bus over with a wrench and turned to glare at me. “GIRL IN THE PURPLE SHIRT!” he roared down the bus. “THIS DOES NOT GO TO YOUR STOP! GET OFF HERE!” I thanked him with all meekness and immediately got up to leave. As I went to step off the bus, the driver held me back. “I TOLD YOU THREE TIMES! I SAID, THREE TIMES, THIS DOES NOT GO TO THE ‘GABBA! I TOLD YOU!” I repeated my thanks and quickly jumped off the bus, burning with embarrassment. I now realise that when I had earlier asked him politely “Does this bus go to the ‘Gabba?”, that mumbling sound he made was in fact the word “No”. Ah geez.

But I say to you, bus drivers, that you are not so perfect! Some of you run into fire trucks! And last night, I snapped this: 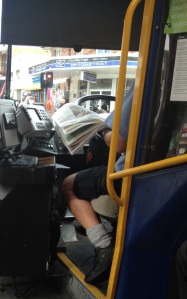 As soon as we reached a red light, the bus driver whipped out the paper and had a read of the news. Safe driving? Smart choices? Intelligent, well-balanced publication? No, no, and nope.

I’M FINALLY ON THE BOARD! Take that, bussies.

I get on the bus, and it’s empty except for three other passengers. One man in very nice shoes is sat right up the front of the bus, looking like he’s trying to practise invisibility. The other two are a couple of clearly drunk middle-aged persons. I tag on and walk past Mr Nice Shoes. He stares straight ahead. I soon learn why.

As I’m about to pass the couple, the bleary-eyed man says “Heeeello” and reaches out a hand to grab at me. I dodge him, say “Hi”, and keep going. This from the Grabber: “F–k you c—t, I was only being polite.”

From my position far, far down the back of the bus, I now notice that the woman with the Grabber is holding a dirty Chux to her forehead. She starts a halting but firm diatribe at the man.

Woman: “I’m not sucking on anything! I’m bleeding!”

Man: “How will we share it with you … with you bllessshhudinuh?”

The woman suddenly shrieks at the bus driver. “SHUDDINAHHHERE? We gone past it?”

The bus driver, to his credit, calmly replies, “Yes, we stop at the train station.”

Bus driver: “Yes [sigh], we stop at the train station.”

Me? I press the bell and get off at the next stop, no matter where the hell it is. Sorry to the bus driver and Mr Nice Shoes, you’re on your own.