Whoa! February actually achieved parity in white-dude and non-white-dude movies released near me! I didn’t even manage to watch all of the films that qualified for my project, for reasons I will explain further on. What is my project? I have challenged myself to watch every movie released at a cinema near me that is not The Story of A White Guy. I am interested in how intersectionality affects my movie-going choices, so I am watching every movie available that is about a woman and/or a person of colour. 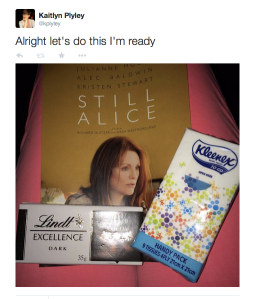 I put on my pinkest pants and my most mentally healthy head and made sure I was exposed to plenty of sunshine and put chocolate in my purse and then I went to see Still Alice.

I needed every self-care strategy I had.

Still Alice is the story of Alice (Julianne Moore), a linguistics professor who finds out she has early-onset Alzheimer’s disease. We watch her deteriorate on-screen. It is brutal. Thank goodness the cinema was nearly empty and I was sitting up the back because I wept from credits to credits. Yet the film is gentle, elegant. Not only is Julianne Moore the queen of everything, but the film direction makes sure the story is told from her character’s perspective. I didn’t notice until the end of the film that none of the action takes place out of Alice’s presence; it is entirely her experience of the disease. So often, stories about devastating illness focus on the experience of the people who must care for the ill person, but Still Alice never stops being about Alice.

Kristen Stewart is wonderful as Alice’s youngest daughter, who steps up to play a major role in her mother’s care. “Thank you for asking,” Alice says to her daughter when asked what Alzheimer’s feels like. Still Alice shows us the creativity with which Alice manages her condition, and her determination not to lose herself. It asks, What is it like to live with this? As someone with a debilitating and poorly understood disease, I was grateful to this movie for asking.

The first movie released near me this year to be about a person of colour, and, unbelievably, the first theatrical movie ever to feature Martin Luther King Jr as a main character. No, really. The first. And it took Oprah Winfrey and Ava DuVernay to push it through.

I knew this movie was about Martin Luther King Jr, but I’m going to have to step up right now and admit that I thought Selma was the name of a female character. My US Civil Rights’ Movement history is sorely lacking. But you don’t need much prior knowledge to be affected by the significance of the film’s events. It is narratively tight; the movie opens in the town of Selma, at a time when King is already an influential civil rights leader and African-American people have won the legal right to vote. But legal rights haven’t translated into equal rights, with black people still being blocked from voting by systemic racism. King fights to raise support for the Voting Rights Act through a historic march from Selma to Alabama’s capital. The opposition to something as simple as the equal right to vote is violent, ugly and all too familiar, with scenes reminiscent of Ferguson.

Let’s go back to the thing about Selma being the first MLK film. I found out while researching this post that most films about the American Civil Rights era have accessed the events through a white character (for example, The Help). David Oyelowo, who plays King in Selma, has said:

It is indicative of my blind spot as a white person that, although I’ve always admired MLK, I had no idea that he’d never been the main character in a movie about him.

Selma contains breathtaking moments of violence, all the more shocking because they jump out between talky scenes of bureaucracy and strategy meetings. The movie also features a particular moment during which I punched the air and shout-whispered “WINFREY!” Oprah is so, so good in this, and she also co-produces. Selma cements its feminist cred by being directed by the first African-American woman to be nominated for a best director Golden Globe, and by passing the Bechdel Test with flying colours (thanks to one of my favourite scenes, in which one African-American woman speaks at length to another African-American woman on why she is proud of her ancestry).

If this is still showing near you, go out and see it.

Alternate tag lines I suggested to no one:
‘The Sequel That’s Keeping It Dench’
‘The Dames Are Back In Town’
‘Downton Abbey Lost Its Money And Moved To India’ 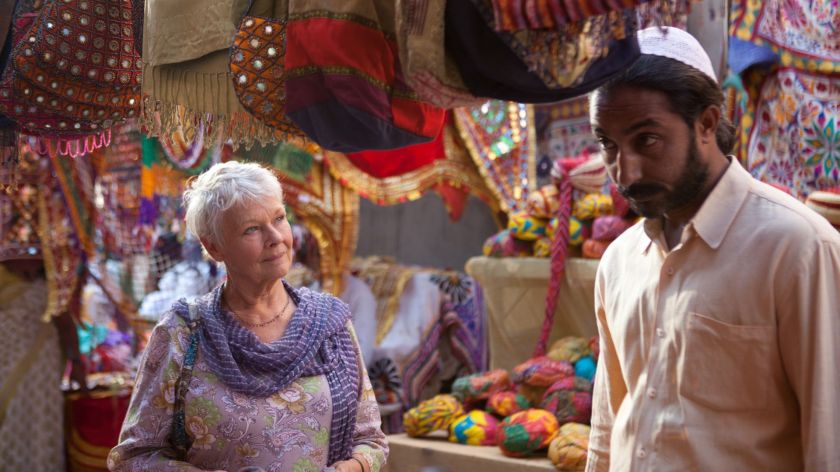 I was charmed by the first Best Exotic Marigold movie, and the sequel did not disappoint. This is sweet comfort viewing, dripping with fairy lights and even a couple of dance breaks. The sequel builds on the first movie’s already large ensemble cast, adding Richard Gere, Black Books‘ Tamsin Greig, and a bigger part for the formidable Lilette Dubey. Sonny (Dev ‘I’ve Been In Love With Him Since Skins‘ Patel) wants to open a second hotel before his wedding, with the help of reformed racist Muriel Donnelly (Maggie ‘Dame By Name, Dame By Nature’ Smith), but his myopic ambition is threatening his relationships. Will he learn his wedding dance in time to save his marriage? Will they find out who is the mysterious spy sent to appraise their hotel? Will Bill Nighy make it through a complete sentence? It’s all adorable and I love it.

There were quite a few moments in the movie where I balked at what seemed like blithe colonialism: white gentry moving in and taking Indian jobs (leading regional tours even though they have to have a local child feed them information). But I thought there was poetic justice in the way Sonny gets his second hotel in the end (spoiler!), and the property he takes over is the Viceroy Club – a leftover of British colonialism. The last we see of the ‘White People’ Club’s romanesque columns, they are being decked out for an Indian wedding reception. It seemed right.

I enjoyed watching a movie that represented younger and older generations without resorting to ageist stereotypes or confected intergenerational warfare. It just avoids progressivism, however, by falling into the sequel trap of attempting to tie up all their stories with neat (hetero-normative, monogamous) bows. I note with interest that the franchise’s only gay character (played by Tom Wilkinson) died in the first movie after a lifetime of unrequited love. But look, the straight people are dancing!

Look, the main thing for me was that The Second Best Exotic Marigold Hotel begins and ends with the Dowager Countess Maggie ‘McGonagall’ Smith, and you can’t go wrong with that. I found it genuinely uplifting, and frankly I needed that after Still Alice and Selma.

The movie adaptation of the book that reportedly romanticises an abusive relationship. I wondered if Fifty Shades would even qualify for this project, since the title refers to its white male protagonist (antagonist?), Christian Grey. But a quick skim of the internet showed that the story is about Anastacia Steele’s emotional journey/’erotic awakening’. I don’t know how true that is, because I have not seen the movie. I am not going to see this movie. At least, not at this time. I am sorry – to the people who said they were looking forward to my review, and to consistency for breaking it – but I just cannot. Not for political reasons, although I have those; I’m avoiding Fifty Shades of Grey for personal reasons. At the top of this post I talked about self-care, and this is me doing that. However I would like to note that this is not a stance against BDSM or erotica or romance – or even Twilight fan-fiction – in any way. I just don’t have the spoons to watch something that potentially dresses up abuse as romance.

I also missed this Kevin Hart comedy, not for any reason other than I was travelling and did not have time to catch it. I will try to watch it soon and include it in a later post.

Fuck, this was bonkers. Channing Tatum was a dog person? Mila Kunis nearly married her grown-up son? Eddie Redmayne was trying to be Gary Oldman in The Fifth Element crossed with Richard Roxburgh in Moulin Rouge if both of them had had lip implants?

I almost didn’t watch Jupiter Ascending for this project because, based on the trailers, I’d thought it was about Channing ‘White Guy’ Tatum, with Mila Kunis as his romantic interest/trophy to save. In fact, most of the marketing made it seem this way. I didn’t even realise until I was watching the movie that Jupiter is the name of Mila Kunis’s character. The movie is all about her: she is the title character; she has the main arc; she is in nearly every scene; she even narrates the introduction! Channing Tatum is her helper friend. And yet, this is how the billing was listed wherever I looked:

… And please don’t tell me Tatum is the ‘bigger name’. Mila Kunis was in Black Swan, people. BLACK. SWAN.

Anyway, I didn’t hate this film. It was fun. They went BIG. Mila Kunis is endlessly watchable and got a few good laughs from the audience. (Eddie Redmayne got the only other laugh, unintentionally. Sorry Eddie.) The cast was diverse, for Hollywood, and it was exciting to see Gugu Mbatha-Raw (from the seriously underrated 2013 film Belle) pop up. In fact, instead of watching Jupiter Ascending, maybe you should go find a copy of Belle. Belle is great. Watch Belle.

If you’re still not sure whether you are someone who would enjoy Jupiter Ascending, it is easy to find out: does the following phrase appeal to you? ‘AMERICAN-AUSTRALIAN SPACE OPERA.’

My answer was yes.

Number of movies released near me during February that were about white men:

3 thoughts on “February: The Second Best Jupiter Ascending Over Selma And Alice”