So, I love the internet. I cannot lie. The internet brings me much of the joys. It helps me feel more connected to the people I love; helps me find new friends and interest groups; makes me a better informed and more thoughtful citizen; and empowers me to express my creative voice. Yeah, I think it’s pretty great.

However, my housemates (Luddites) snicker derisively every time I use the word “blogosphere” in conversation. I protest, “It’s a real thing!” And they say, “Yeah, as real as the internet, HA HA!” The more I splutter, the more they snicker. Huh, plebs. What are we, in 1992? I thought the internet was mainstream now. Geek chic, et cetera?! Someone please tell my housemates!

The thing that surprised me was their assertion that the blogosphere isn’t real. I could try to unpack what it means to be “real” and go read up on Baudrillard and simulacra and theories on mimesis, but it’s a Saturday afternoon and frankly I have other things to do. My main protest was that blogs are created by real people, sitting at their real computers. So there’s realness! Sure, they are presenting a particular image of themselves to the world, an image carefully controlled by themselves. But who isn’t? I don’t think there is much difference in authenticity between the way someone presents their self to me when I first meet them, and the way someone presents their self to me on the internet. We’re all pretending to some degree.

But anyway, I get a lot of joy from reading other people’s blogs. I love feeling a connection to other lives – in my community, and around the world – every day, wherever I am.

Lately, though, the internet has been a little bit heartbreaking.

Two of my favourite bloggers, people whose lives I have been following for months, have recently broken up with their long-term boyfriends. One of them, who vlogs weekly on YouTube, has openly said that she and her boyf split up. She even made a sad video about it that made me tear up a little, because I want to give her a big best-friend hug but I can’t because she lives in Los Angeles and also she does not know who I am. The other blogger has not said anything explicit about a break-up. But you know. You just know. When they go from blogging once or twice a week, from writing joyful expositions about their “meet-cute story” and the boyfriend’s adorable obsession with rugby – when they go from that to not posting for months, and then return with abstract, grand treatises about finding yourself and the importance of inner strength … You know what’s gone down.

And I kind of resent that I immediately knew it was a break-up. I kept telling myself that there are manifold reasons why a person might step away from their prolific blogging and go quiet for a few weeks. We’re complex creatures, right? Maybe they had family stuff going on. Maybe they got a new job. Maybe they just discovered Battlestar Galactica and needed to watch ALL of it in one sitting but couldn’t because their housemate also discovered it at the same time and works full-time so they had to wait to watch it with her because they’re terrible at keeping secrets and would definitely have committed plot spoilers if they’d watched ahead.

But, no. Nothing stops the heart quite like a break-up. At least, not for affluent, upwardly-mobile twenty-somethings. I have a friend who recently found out that her cervical cancer had advanced another stage, but does that bother her as much as her boyfriend staying out an hour later than he said he would? Nope. I think perhaps it is because she knows exactly how much control she doesn’t have over her medical condition. The doctor says “Here are the decisions you need to make”, and she makes them, and she deals with the rest. 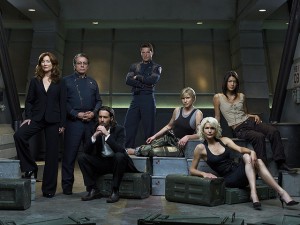 I bet cylons don’t have to deal with this shit.

We invest so much in relationships, but we know so little about them. I mean, really, as a species, we barely understand relationships. Why else do we spend so much time talking about them? We don’t devote this much time and energy to the law of gravity, or why grass is green. Those conversations go mostly like this: “What happens if I let go of something? It falls. Ah. And why are all these things green? Chlorophyll. Okay, understood. Now I shall think of other things.” But conversations about interpersonal relationships go like this: “But WHYYYYYYYYYYYYYYYYYYYYY”. Repeated over and over, ad infinitum.

It makes me sad that these seemingly adorable relationships I’ve been reading about on the internet are breaking up. You want to hope that maybe somewhere, somebody is not breaking up. Maybe somebody is staying together. But I am grateful to these bloggers for sharing their stories and letting me peek into their lives a little. They are making themselves vulnerable to a faceless mass of viewers, and that is incredible. It helps to remind me that we’re all kind of muddling through, even the ones who present a highly edited, storied version of themselves to the public. They’re real, too.

A good friend of mine recently said, “I just pretend to be a person.” She thinks she lacks some essential life-skill that other people innately have. I said, “Have you ever people-watched in the city at rush hour? Everyone is pretending to be a person. If you watch long enough, you’ll see that everyone is doing that thing where you watch everyone else to see if they’ve noticed that you’re a total freak.” We’re all real and confused and a bit messed-up, all of us, everyone.

We’re all just pretending we’re not.